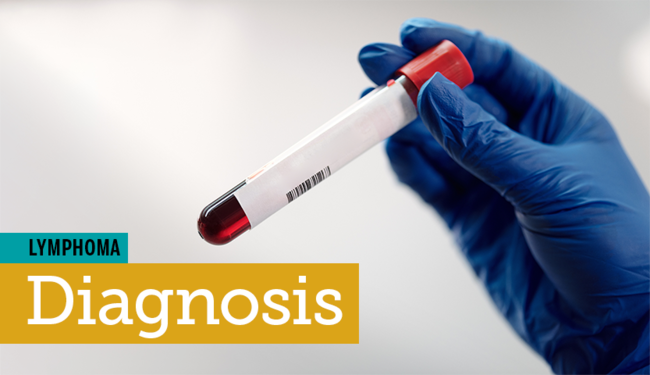 Hodgkin and non-Hodgkin lymphoma are cancers that originate in the lymphatic system, a key component of the body’s immune system. The lymphatic system consists of the bone marrow; organs including the spleen, lymph nodes, and thymus; and vessels that transport fluids throughout the body. A healthy lymphatic system removes bacteria, excess fluid, and waste material from old and damaged cells. Lymphoma is related to other blood cancers, including leukemia, myeloma, and myeloproliferative neoplasms (MPNs).

Fever, night sweats, and weight loss are considered “B symptoms.” B symptoms are systemic, meaning they affect the entire body. The presence of B symptoms influences staging and prognosis for lymphoma.

Sometimes people don’t exhibit any obvious symptoms of lymphoma, and the cancer is found when routine blood work or other tests return abnormal results.

Most cases of NHL occur in people in their 60s or older. Hodgkin lymphoma frequently occurs in young adults, but can also impact older adults. Overall, HL and NHL occur more often in men than women. In the United States, lymphoma is more common among white Americans than Black or Asian Americans.

A variety of medical tests can be used to diagnose and stage Hodgkin and non-Hodgkin lymphoma. Many of the tests for HL and NHL overlap. Some tests are used to confirm a diagnosis, while others are used to determine the type of lymphoma and the stage of the illness.

If you have symptoms consistent with lymphoma, a medical history is likely the first step toward diagnosing both HL and NHL. Your physician will conduct an in-depth medical history and ask you about the presence of lymphoma symptoms and any disease risk factors you may have. Your provider may also conduct a physical exam to assess the lymph nodes in your neck, underarms, and groin. Swollen lymph nodes are a common symptom of both HL and NHL. They may also assess your spleen and liver to identify any enlargement.

If your health care provider identifies swollen lymph nodes during a physical exam, they may call for a lymph node biopsy. This involves removing part of or an entire enlarged lymph node. Depending on the location of the lymph node being biopsied, you will receive a local anesthetic or general anesthesia. A lymph node biopsy can help identify the type and subtype of lymphoma you have and help your care team develop a treatment plan.

A hematopathologist — a doctor who specializes in diagnosing blood, bone marrow, and lymphatic diseases — will evaluate your biopsy sample. When assessing a lymph node sample, a hematopathologist will look for cell structures that are consistent with the different types of lymphoma.

In the case of NHL, the sample from the biopsy will be used to help determine if B cells or T cells have become cancerous. B-cell and T-cell are the two primary categories of NHL.

There are three main types of lymph node biopsies used to diagnose Hodgkin and non-Hodgkin lymphoma.

A core needle biopsy uses a needle to collect a small sample of tissue from a lymph node. This method is usually used for lymph nodes in areas that are difficult to reach using excisional or incisional biopsy. The amount of tissue collected may not be sufficient for diagnosis.

A fine needle aspirate (FNA) biopsy uses a very small needle to collect cells from a lymph node. The very small sample of cells is insufficient to confirm an HL or NHL diagnosis. FNA biopsy is often used to test for cancer relapse.

Immunophenotyping looks for certain cell markers in a blood sample and lymph node sample. The presence of certain cell markers or proteins can help to diagnose the subtype of HL or NHL. Immunophenotyping is particularly important for NHL. This technique can help doctors determine if the cancer cells are B cells or T cells and identify other important characteristics.

Chromosome tests are used to evaluate the DNA of cancer cells for specific genetic mutations. This is another tool for identifying the subtype of lymphoma. These additional tests are often not needed for Hodgkin lymphoma.

Immunophenotyping and chromosome tests can be very important for evaluating prognosis and determining the best treatment plan for certain types of non-Hodgkin lymphoma.

A lumbar puncture, also called a spinal tap, may be used in cases of NHL to determine if the cancer cells have spread to the cerebrospinal fluid (CSF). This test is usually only done if there are symptoms that indicate that lymphoma has spread to the brain.

After receiving a diagnosis of Hodgkin or non-Hodgkin lymphoma, you may undergo additional testing to confirm the subtype or stage (extent) of your lymphoma. HL and NHL can each be classified into four stages (stage I through IV). In both illnesses, stage I is the most localized and stage IV is the most widespread.

Imaging tests can be used to stage HL or NHL. They can also be used to identify the cause of certain symptoms, check if treatment is working, or check for cancer recurrence.

A positron emission tomography (PET) scan may be used to determine if a swollen lymph node contains lymphoma cells or check for small areas of cancer. PET scans are also used to evaluate the effectiveness of chemotherapy or monitor lymph nodes after treatment.

Blood tests are often used to evaluate the extent of a person’s lymphoma. They can also assist in diagnosing both types of lymphoma.

A CBC test measures the number of red blood cells, white blood cells, and platelets in a blood sample. Low blood cell counts could be a sign that lymphoma has spread to the bone marrow. This could indicate a more advanced stage of lymphoma. CBC tests are used for HL and NHL.

An ESR test measures how quickly red blood cells settle in a test tube. Faster than normal settling can indicate inflammation. This test is usually used for Hodgkin lymphoma.

Whether you have Hodgkin or non-Hodgkin lymphoma, you may undergo additional blood tests to evaluate liver and kidney function. Blood tests may also be used to check for conditions like HIV or hepatitis B or C. The presence of these viruses could impact your treatment plan.

Does anyone know what the progression of symptoms are with CLL?

A lymphoma diagnosis can significantly impact quality of life. One of the key effects of the...

A lymphoma diagnosis can significantly impact quality of life. One of the key effects of the...
read article >

Hodgkin vs. Non-Hodgkin Lymphoma: How Are They Different?

Hodgkin vs. Non-Hodgkin Lymphoma: How Are They Different?

Self-care is a crucial aspect of lymphoma treatment that is sometimes overlooked. While your...

Self-care is a crucial aspect of lymphoma treatment that is sometimes overlooked. While your...
read article >

Peripheral neuropathy, a sensation of numbness, tingling, weakness, or pain, is a common and...

Peripheral neuropathy, a sensation of numbness, tingling, weakness, or pain, is a common and...
read article >

Living with lymphoma can mean navigating through plenty of unanswered questions involving the...

Living with lymphoma can mean navigating through plenty of unanswered questions involving the...
read article >

Watch on Demand: Managing and Treating Leukemia and Other Blood Cancers

“Fatigue can be very difficult to fix — but having said that, one of the things we do when we're...

Watch on Demand: Managing and Treating Leukemia and Other Blood Cancers

“Fatigue can be very difficult to fix — but having said that, one of the things we do when we're...
read article >

Lymphoma Awareness: How To Get Involved

If you’re living with lymphoma, you’re already aware of the impact the condition can have on your...

Lymphoma Awareness: How To Get Involved

If you’re living with lymphoma, you’re already aware of the impact the condition can have on your...
read article >

T-cell lymphoma is a type of blood cancer. It is a form of non-Hodgkin lymphoma that develops...

T-cell lymphoma is a type of blood cancer. It is a form of non-Hodgkin lymphoma that develops...
read article >

A person diagnosed with lymphoma is likely concerned with the disease prognosis. Prognosis refers...

A person diagnosed with lymphoma is likely concerned with the disease prognosis. Prognosis refers...
read article >

close
OVERVIEW TYPES SYMPTOMS DIAGNOSIS CAUSES TREATMENTS RELATED CONDITIONS STAGES
New to MyLymphomaTeam? Learn More
Quick Links
Q+A Treatments A-Z Resources Are you a provider? Crisis
About Us
What is MyLymphomaTeam? Partner with us Terms of service Press/News Privacy policy Cookie policy
Help With This Site
Getting started FAQ Community guidelines Contact us Accessibility
© 2021 MyHealthTeams. All rights reserved.
MyLymphomaTeam is not a medical referral site and does not recommend or endorse any particular Provider or medical treatment.
No information on MyLymphomaTeam should be construed as medical and/or health advice.