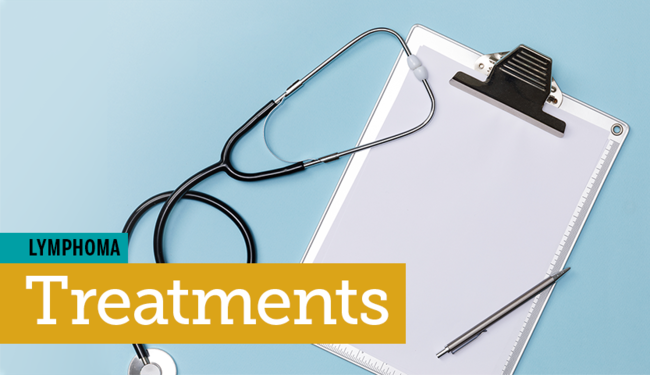 Different therapies are used to treat the many types of lymphoma, a cancer of the lymphatic system. The best treatment option for you will be determined by your specific type of cancer, as well as additional factors, including your prognosis, age, and personal preferences. Depending on your specific type and stage of Hodgkin or non-Hodgkin lymphoma, you may be treated with a combination of therapy types.

This article will cover the major categories of treatments used in lymphoma and how each works to fight cancer.

Hodgkin lymphoma can be divided into classical HL and nodular-lymphocyte HL. Classical HL has additional subcategories:

Some types of aggressive NHL include:

Some types of indolent NHL include:

The stage of your lymphoma will also influence your treatment options. More advanced cancers may require more aggressive treatments or more cycles of treatment.

Your age and your general health can influence decisions about lymphoma treatments. Some treatments have possible side effects that may be considered too risky for older adults or people living with other health conditions.

Specific genetic mutations can make a person more or less likely to respond to a certain treatment. You may undergo genetic testing as part of the diagnostic process to help identify the best treatment option for you.

The International Prognostic Index (IPI) is a risk assessment tool for people with non-Hodgkin lymphoma. Oncologists assign a point value to factors like age, disease stage, and physical function. The IPI score helps doctors evaluate an individual’s prognosis and risk of cancer relapse. Your care team will use this information to help determine your treatment plan. For example, they may recommend a more aggressive treatment for a lymphoma that has a poorer prognosis.

Your oncologist or hematologist-oncologist will also consider:

Your personal preferences and priorities are a key factor in your cancer treatment decisions. For instance, is it more important to you to live as long as possible or to maintain a high quality of life with few side effects from treatment? Is it your top priority to use the most effective treatment or to avoid the risk for serious side effects? Do you plan to have children in the future? The best treatment plan for you will be the one you and your doctor agree to together in a shared decision-making process.

Lymphoma is caused by the rapid, uncontrolled growth of abnormal white blood cells in the lymphatic system, which has functions in both the circulatory system and the immune system. Chemotherapy works by directly killing or damaging rapidly dividing cells, including cancer cells, in your body. These potent drugs must be toxic to kill cancer cells, but they can also damage healthy cells. Depending on which drugs are involved, chemotherapy may be administered intravenously (by IV), injected into the skin or muscle, or taken orally as pills or capsules. Some chemotherapy may be taken at home. Other types may require travel to a cancer treatment center to receive each dose or a hospital stay for the duration of a treatment cycle, which may last weeks. Chemotherapy is prescribed before stem cell transplantation and may be used in combination with radiation therapy or targeted therapy.

Your care team can help you manage these side effects.

Chemotherapy drugs are often combined into regimens. Combining medications helps ensure lymphoma cells don’t become resistant to one medication and can help minimize side effects by allowing for lower doses of each individual drug. Below are some commonly used regimens for Hodgkin and non-Hodgkin lymphoma.

The following chemotherapy regimen is considered the standard first-line treatment for classical HL in adults in North America:

There are several additional regimens your doctor may choose instead. Targeted therapies may also be used along with chemotherapy for classical HL.

ABVE-PC, a similar regimen to ABVD, is commonly used for children with classical Hodgkin lymphoma. It includes:

ABVD with radiation therapy can be used to treat people with early stage nodular lymphocyte-predominant Hodgkin lymphoma (NLPHL). ABVD plus radiation therapy or ABVD plus the targeted drug Rituxan (rituximab) is commonly used for advanced cases of NLPHL.

Lymphoblastic lymphoma, an aggressive T-cell lymphoma, is often treated with the same chemotherapy regimens as acute lymphocytic leukemia. The regimen may include:

HDAC inhibitors can stop the cycle of cell growth and division and cause cell death. HDAC inhibitors are often used to treat peripheral T-cell lymphomas and cutaneous T-cell lymphomas that are relapsed or refractory (haven’t responded to other treatments). Examples include Beleodaq (belinostat), Istodax (romidepsin), and Zolinza (vorinostat).

Phosphatidylinositol 3-kinases (PI3Ks) are a group of proteins that contribute to cell growth and survival. PI3K inhibitors can be used as second-line treatments for people with follicular lymphoma and CLL/SLL. Examples of PI3K inhibitors include Zydelig (idelalisib), Aliqopa (copanlisib), and Copiktra (duvelisib).

The following drugs are among the monoclonal antibodies approved to treat lymphoma:

Chimeric antigen receptor (CAR)-T cell therapy works by modifying a person’s own T cells to seek out and destroy the type of cells involved in lymphoma. T cells are harvested in a process similar to donating blood. Next, T cells are genetically modified to recognize and attack a certain receptor found on cancer cells. Finally, the modified T cells are infused back into the body.

CAR-T cell therapy can have serious side effects including cytokine release syndrome, neurological problems like confusion or seizures, and infection. Because of the potential of serious side effects, CAR-T cell therapies like Yescarta (axicabtagene ciloleucel) and Kymriah (tisagenlecleucel) are only approved to treat diffuse B-cell lymphoma and other B-cell lymphomas when at least two other treatments have been tried.

Stem cell transplants can have severe side effects and may not be a good option depending on a person’s age and other health conditions. Possible side effects include nausea and vomiting, mouth sores, infection, and inflammation in the lungs. When stem cells come from others, graft-versus-host disease is a risk.

There are two main types of stem cell transplant: autologous and allogeneic.

Allogeneic stem cell transplant is not a common treatment for HL or NHL. It is usually only considered in cases where cancer is highly aggressive, has relapsed, or hasn’t responded to other treatments.

Radiation therapy (also called radiotherapy) works by damaging cancer cells so they can no longer reproduce. Radiation is only effective where it is delivered in the body. Whenever possible, radiation is limited to the affected lymph nodes to minimize damage to healthy cells. Radiation is usually provided in an outpatient setting at a hospital or cancer clinic.

Radiation is more frequently used to treat indolent than aggressive non-Hodgkin lymphomas. Radiation is considered one of the standard therapies for early stages of indolent NHLs like follicular lymphoma or MALT lymphoma. Radiation may also be used in advance of a stem cell transplant to treat a person with NHL whose cancer has returned or hasn’t responded to other treatments.

Clinical trials can allow a person with lymphoma to access a new treatment or combination of treatments that aren’t otherwise available. Clinical trials can be an appropriate option for all types of lymphomas at any stage, depending on personal and health factors and trial participation criteria.

Some types of indolent lymphomas may not require treatment right away. Instead, doctors may recommend a “watchful waiting” approach, also called watch and wait or active surveillance. During watchful waiting, you will be closely monitored by your doctor, including regular appointments and blood tests. Watchful waiting may last for years until there are signs or symptoms that indicate cancer is beginning to grow more rapidly.

Healthy eating, exercise, and quitting smoking can improve your overall health and well-being, whether or not you are actively treating your lymphoma. If you smoke cigarettes, quitting smoking may help you live longer, reduce side effects and complications from cancer treatment, and speed your recovery from the effects of treatment.

Can Lymphoma Be Cured?

It is possible to live a long and healthy life after a lymphoma diagnosis. More effective treatments for lymphoma and other blood cancers have increased survival rates and rates of remission over the past 10 years. Many lymphomas are highly treatable, and it is possible to achieve complete remission — even with some aggressive lymphomas. While some lymphomas like CLL/SLL are not currently curable, they are slow-growing, which allows a person to manage their cancer as a chronic illness.

Lymphoma - The Path to Diagnosis