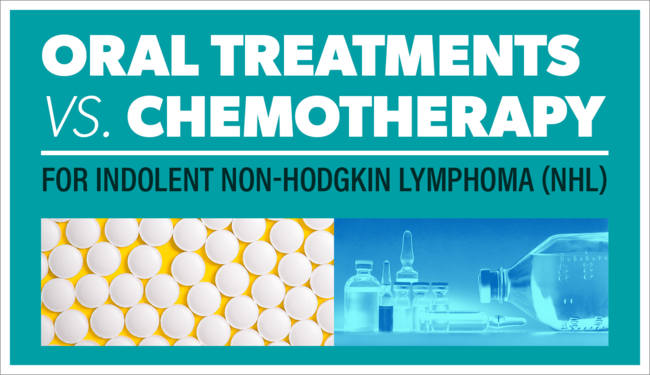 Non-Hodgkin lymphoma often develops in older people — more than half are 65 or older when they are first diagnosed. Indolent (slow-growing) types of NHL make up approximately 40 percent of NHL cases. Indolent types of NHL can include:

Until recently, traditional chemotherapy was the main treatment option for most indolent types of lymphoma. Unfortunately, older adults are more likely to experience serious side effects from chemotherapy. Because indolent NHL is often diagnosed later in life and tends to progress slowly, doctors often recommend a “watch and wait” approach rather than beginning treatment for indolent NHL right away.

In the past 10 years, new oral targeted therapies have been developed to treat indolent NHL with potentially fewer side effects than traditional chemotherapy. Chemotherapy indiscriminately kills any rapidly growing cells. Unlike chemotherapy, these oral targeted therapies identify proteins or genes specific to the type of cell involved in the cancer. By better targeting cancer cells, these therapies can often work more effectively with fewer side effects.

What’s more, oral targeted therapies don’t need to be administered at a clinic through an injection or intravenous (IV) infusion. Instead, you can treat your NHL by simply taking pills or capsules at home.

The following table provides a quick rundown of oral therapies currently available for indolent NHL and which types of NHL they are approved to treat. 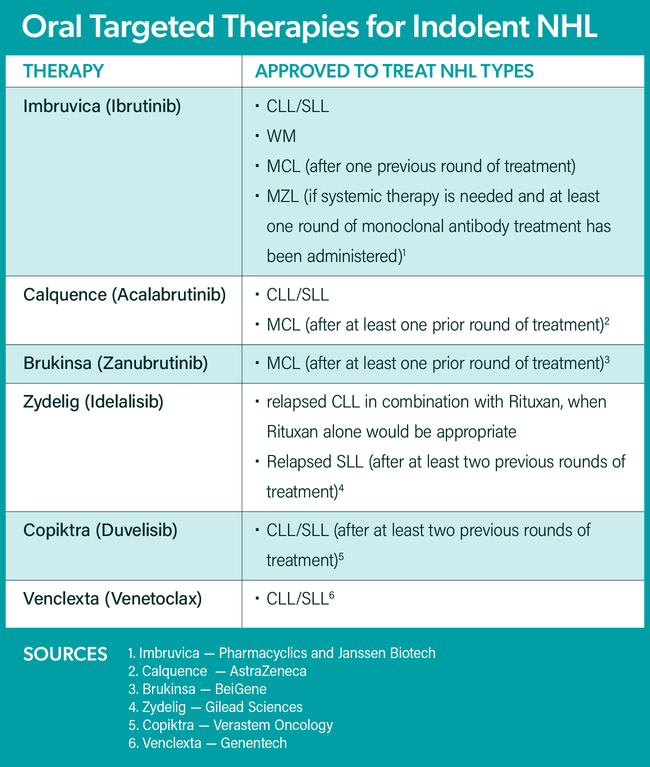 Types of Oral Therapies for NHL

The U.S. Food and Drug Administration (FDA) has approved several different types of oral therapies to treat indolent NHL. Each works in a different way to target the cells involved in cancer. Some oral targeted therapies are used as monotherapies — prescribed alone to treat NHL. In other cases, they may be combined with chemotherapy, immunotherapy, or other types of treatment to be most effective.

There are two main types of lymphocytes: B cells and T cells. Eighty-five percent of NHL types involve malignant B cells, including CLL/SLL, MCL, WM, and MZL.

Bruton’s tyrosine kinase (BTK) inhibitors are especially useful against NHL because they target the chemical signals that control the production of new B lymphocytes. By blocking these signals, BTK inhibitors keep new lymphoma cells from developing.

Imbruvica (ibrutinib), the first BTK inhibitor indicated to treat non-Hodgkin lymphoma, was approved for use in CLL/SLL by the FDA in 2014. Since then, Imbruvica has become a first-line treatment for CLL/SLL, as well as a preferred treatment for people whose CLL/SLL has not responded to a first round of treatment (refractory CLL/SLL) or whose CLL/SLL has recurred (relapsed CLL/SLL). Imbruvica can be used alone or in combination with Rituxan (rituximab) or with Gazyva (obinutuzumab). Rituxan and Gazyva are immunotherapy drugs called monoclonal antibodies that modify the immune system to better target B cells.

Imbruvica is FDA approved for people with MCL who have received at least one round of another treatment. It also has been approved to treat people with MZL who need systemic therapy (treatment for cancer that has spread throughout the body) and who have already undergone at least one round of monoclonal antibody treatment, such as Rituxan. Imbruvica is also a first-line treatment for WM.

Imbruvica’s side effects are often more tolerable than traditional chemotherapy. In one clinical trial, people receiving a drug combination of Imbruvica and Rituxan for CLL/SLL were less likely to experience severe side effects than those receiving the standard chemotherapy regimen FCR (fludarabine, cyclophosphamide, and Rituxan).

Imbruvica is available in once-a-day tablet form and as capsules taken three times a day. The most common side effect is mild diarrhea. Other side effects include anemia (low red blood cell count), neutropenia (low count of neutrophils, a type of white blood cell), nausea, constipation, fatigue, aches, and rash.

Calquence is taken in capsule form twice a day. It can cause low red and white blood cell counts and low platelet counts. Other side effects include headache, diarrhea, muscle and joint pain, infection, hemorrhage, and irregular heartbeat. Sunscreen use is important for people taking Calquence, as skin cancers can be a side effect.

Brukinsa (zanubrutinib) is a BTK inhibitor that is approved to treat MCL in people who have undergone at least one previous round of treatment. It is taken as a pill once or twice a day. Side effects include low white and red blood cell counts, rash, bruising, diarrhea, and cough.

Copiktra (duvelisib) is a PI3K inhibitor that has been approved by the FDA for people with CLL/SLL who have already undergone at least two rounds of treatment. It is taken in pill form twice a day. Copiktra has similar side effects to Zydelig.

Due to a specific genetic mutation, some malignant cells produce too much of a protein called BCL-2. This protein prevents the damaged tumor cells from self-destructing in response to their abnormalities.

The BCL-2 antagonist Venclexta (venetoclax) works by targeting the extra BCL-2 protein and causing tumor cells to die. Venclexta is FDA approved to treat adults with CLL/SLL. It is a pill that is taken once a day. A combination of Venclexta and Rituxan is a preferred treatment for refractory or relapsed CLL/SLL.

Anemia, neutropenia, diarrhea, and nausea are possible side effects of Venclexta. Tumor lysis syndrome is a rare but dangerous side effect of oral therapies that may occur during Venclexta use. Venclexta kills many tumor cells quickly, but its effectiveness means that the contents of the dead cells could clog the kidneys, leading to kidney failure. Because of these risks, people taking Venclexta may need to stay in the hospital when beginning the drug or increasing the dose.

Speaking With Your Doctor

There are many different types of NHL, and new therapies are researched all the time. As new drugs are further studied, researchers learn more and more about which cancer treatments best combat specific types of NHL with the fewest side effects.

Jessica Wolpert works to empower patients through the creation of content that illuminates treatments' effects on the everyday lives of people with chronic conditions. Learn more about her here.